Nawangwe noted that government is helping them (Makerere), secure funds for the hospital.

“What is remaining for us and what we are struggling with is to get our own teaching and research hospital. Well I believe we are in advanced stages of this and the government is helping us to get funders for this. So we are really hoping that very soon we shall have our own teaching and research hospital and I think then the quality will just fly,” he said.

Nawangwe added, “I was discussing this with our ambassador in Brussels who is coordinating and I think they had not understood what a teaching and research hospital is because they were saying, Why do you need over $100 million to build the hospital?, 100 million is enough. And I said no. This is a comprehensive teaching and research hospital. We expect it to be the best hospital in the region. So that we people begin to come in here for medical tourism, and not our people going somewhere. For that I think she understood and the hospital to support all the research that our colleagues in the college are doing in a meaningful way.”

Commenting on the same, Associate Professor David Mayer, said the University has traditionally used Mulago Hospital as the main teaching hospital, saying it’s high time the university owned a facility it has over full ownership to spur research.

“I think over the last couple of years, we have found that probably rather than just rely on Mulago Hospital, which traditionally has been the teaching hospital for the College of Health Sciences. I think there’s some students who have also been able to go to a few private hospitals around but I think we’ve reached a point where we feel there’s a need to have ownership of a facility that, you know, provides opportunities to do research and opportunities to teach, and opportunities for clinical care.”

Adding, “I think most universities and most good medical schools around the world will usually be plugged into hospital system. And some of those medical schools actually own and run those healthcare facilities. We see it as the future for health education in Uganda, and that’s why this investment is being considered.”

Makerere University Teaching Hospital, (MUTH), is a planned hospital, to be constructed in Katalemwa, Wakiso District.

The development will include the hospital, student housing, staff housing, a day-care centre and green recreational spaces. It is expected to host interns, while they practice medicine under supervision for one year, before they attain an unrestricted licence to practice medicine.

The budgeted cost for the construction of the hospital was estimated at around US$400 million. Construction was expected to start in 2020, however it delayed.

The remarks were made at the 16th Joint Annual Scientific Conference 2022, under the Theme “Makerere @100: The Role of Health Professions Education in Strengthening Health Systems, Research, Global and Community Health for Economic Development”. 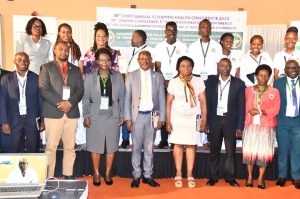 Nawangwe noted that as a university and particularly the College of Health Sciences, they are faced with enormous challenges in the region that “might determine whether this region develops or remains behind,” saying the College has to get involved in solving these issues.

“So we have to begin thinking about what we do directly for health services, the emerging non communicable diseases obesity, other non communicable diseases, and I know that the college is working with partners to address these issues. And of course, the epidemics, which seem to like our region so much. We must develop the capacity to manage all of them,” he said.

She added that they will also deliberate on the multi-disciplinary tracks of Medical Education, Science and the path to Policy, Health Systems, Emerging and re-emerging diseases, Pandemics over the last century, Mentoring the next generation, Health as a business, Non-communicable disease, Occupational Health and Safety and Maternal and Child Health, and the 20th Dr. Matthew Lukwiya (who died during the Ebola epidemic in 2000 memorial lecture on day 3.

Prof. Annettee Nakimuli Dean, School of Medicine noted this year’s conference is very special as it comes at a time when Makerere is commemorating 100 years of existence and MUMSA celebrating its fifty-year anniversary.

She noted that the conference will be used to celebrate the many achievements over the last century while recognizing the important role that individuals and partner institutions have played over the years.