Developed by the National Research Institute of Chinese Medicine, NRICM101, also called Taiwan Chingguan Yihau (清冠一號), is on the approved list of medications prescribed to people with COVID-19.

The traditional Chinese medicine (TCM) treatment has been proven to ease symptoms of COVID-19 while also inhibiting the virus’ ability to infect and replicate. 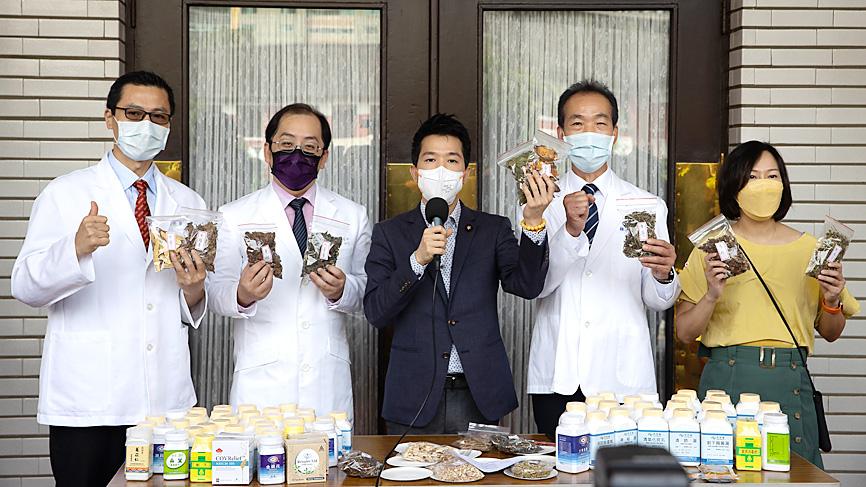 As COVID-19 cases have skyrocketed, so has demand for the drug, with TCM pharmacies reporting increased inquiries for medicine similar to NRICM101.

Some unverified sellers are reportedly selling the drug for as much as NT$5,000 per box, far above its normal retail price of NT$1,500 to NT$2,000.

Speaking at a news conference in Taipei, Democratic Progressive Party Legislator Mark Ho (何志偉) and the Taipei Chinese Medical Association urged the public not to buy such products without first consulting a TCM doctor.

About 80 percent of people in Taiwan confirmed with COVID-19 use TCM to treat their condition, Ho said, gesturing to the array of herbal treatments displayed before him to emphasize that there is no shortage.

While NRICM101 might enjoy widespread acclaim, many other effective treatments are available, he said, urging the public to refrain from hoarding medication.

Association chief supervisor Lin Yuan-chuan (林源泉) said that more than 1,000 clinics nationwide — including more than 400 in Taipei — have agreed to provide remote consultations.

Through these consultations, TCM doctors can prescribe appropriate treatments for each patient, he added.

NRICM101 is not appropriate for everyone, association executive supervisor Yen Chih-cheng (顏誌誠) added, urging people to consult a doctor first.

The appeal comes amid a nationwide shortage of NRICM101 as cases soar, and as people without COVID-19 reportedly take the drug believing it would boost their immunity.

Kuang Tien General Hospital TCM practitioner Wang Tun-cheng (王敦正) advised against taking NRICM101 without a prescription, as it could cause gastrointestinal discomfort if taken improperly.

NRICM101 is a “cold” medication, meaning it could cause stomach problems in patients with a cold physique, Wang said, urging people to consult a TCM doctor before taking NRICM101.

Other treatments are better suited to boosting immunity, such as those developed by Kuang Tien hospital with similar ingredients to NRICM101, Wang said.

Comments will be moderated. Keep comments relevant to the article. Remarks containing abusive and obscene language, personal attacks of any kind or promotion will be removed and the user banned. Final decision will be at the discretion of the Taipei Times.

we have vaccines and drugs to treat it

New mental health group reaches out to the military…