Great West Life Assurance Co. Can acquired a new stake in shares of AMN Healthcare Services, Inc. (NYSE:AMN – Get Rating) in the 3rd quarter, according to its most recent 13F filing with the SEC. The fund acquired 54,615 shares of the company’s stock, valued at approximately $5,784,000. Great West Life Assurance Co. Can owned 0.13% of AMN Healthcare Services at the end of the most recent quarter.

AMN Healthcare Services (NYSE:AMN – Get Rating) last announced its quarterly earnings results on Thursday, November 3rd. The company reported $2.57 earnings per share (EPS) for the quarter, topping analysts’ consensus estimates of $2.33 by $0.24. AMN Healthcare Services had a return on equity of 51.47% and a net margin of 8.73%. The company had revenue of $1.14 billion during the quarter, compared to analyst estimates of $1.10 billion. During the same quarter in the previous year, the firm posted $1.73 EPS. The firm’s quarterly revenue was up 29.7% on a year-over-year basis. As a group, research analysts expect that AMN Healthcare Services, Inc. will post 11.56 EPS for the current year.

Want to see what other hedge funds are holding AMN? Visit HoldingsChannel.com to get the latest 13F filings and insider trades for AMN Healthcare Services, Inc. (NYSE:AMN – Get Rating). 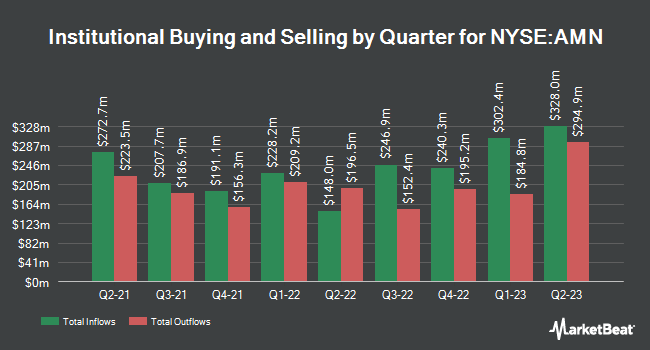 This instant news alert was generated by narrative science technology and financial data from MarketBeat in order to provide readers with the fastest and most accurate reporting. This story was reviewed by MarketBeat’s editorial team prior to publication. Please send any questions or comments about this story to contact@marketbeat.com.

Before you consider AMN Healthcare Services, you’ll want to hear this.

MarketBeat keeps track of Wall Street’s top-rated and best performing research analysts and the stocks they recommend to their clients on a daily basis. MarketBeat has identified the five stocks that top analysts are quietly whispering to their clients to buy now before the broader market catches on… and AMN Healthcare Services wasn’t on the list.

While AMN Healthcare Services currently has a “Buy” rating among analysts, top-rated analysts believe these five stocks are better buys.

MarketBeat has just released its list of 20 stocks that Wall Street analysts hate. These companies may appear to have good fundamentals, but top analysts smell something seriously rotten. Are any of these companies lurking around your portfolio? Find out by entering your email address below.

Get This Free Report

My Fallopian Tube Burst Due To An Ectopic Pregnancy. An ER Doctor Sent Me Home.

Structural analysis of main protease from delta and gamma coronaviruses

Why Telehealth Implementation Is Not Just a Project for IT

How to live a healthy lifestyle

My Fallopian Tube Burst Due To An…

Why Telehealth Implementation Is Not…