Since the beginning of the coronavirus disease 2019 (COVID-19) pandemic, which is caused by the sudden outbreak of the severe acute respiratory syndrome coronavirus-2 (SARS-CoV-2), genomic evolution of the virus has occurred. This has led to the emergence of several SARS-CoV-2 variants that have been classified as variants of concern (VOCs) and variants of interest (VOIs) in accordance with their transmission rates, virulence, and capacity to evade immune responses induced by natural infection or vaccination. 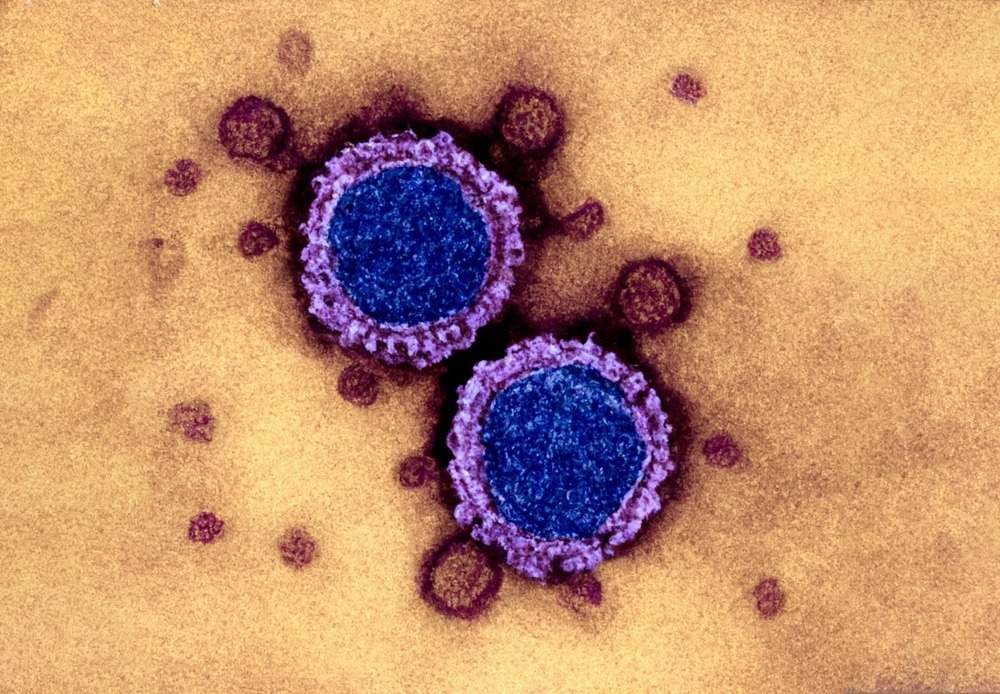 The Omicron BA.1 VOC, which contains more than thirty mutations in its spike protein, quickly replaced the Delta strain and, soon after its emergence, became the dominant circulating strain of SARS-CoV-2 in most countries across the world. Although COVID-19 vaccines have failed to protect individuals from contracting the disease, they have successfully prevented severe infection due to preserved functionalities of T-cells and Fc effector cells, as well as antibody-dependent cellular cytotoxicity (ADCC).

A new South African study published on the bioRxiv* preprint server evaluates the sensitivity of BA.4 against nAbs and ADCC in both vaccinated and unvaccinated individuals infected with the SARS-CoV-2 D614G, Beta, Delta, or BA.1 strains.

BA.4 has been shown to evade nAbs induced by previous infection and vaccination. In the current study, BA.4 resistance was observed against nAbs and ADCC-mediating antibodies elicited by four VOCs, including D614G, Beta, Delta, and BA.1. 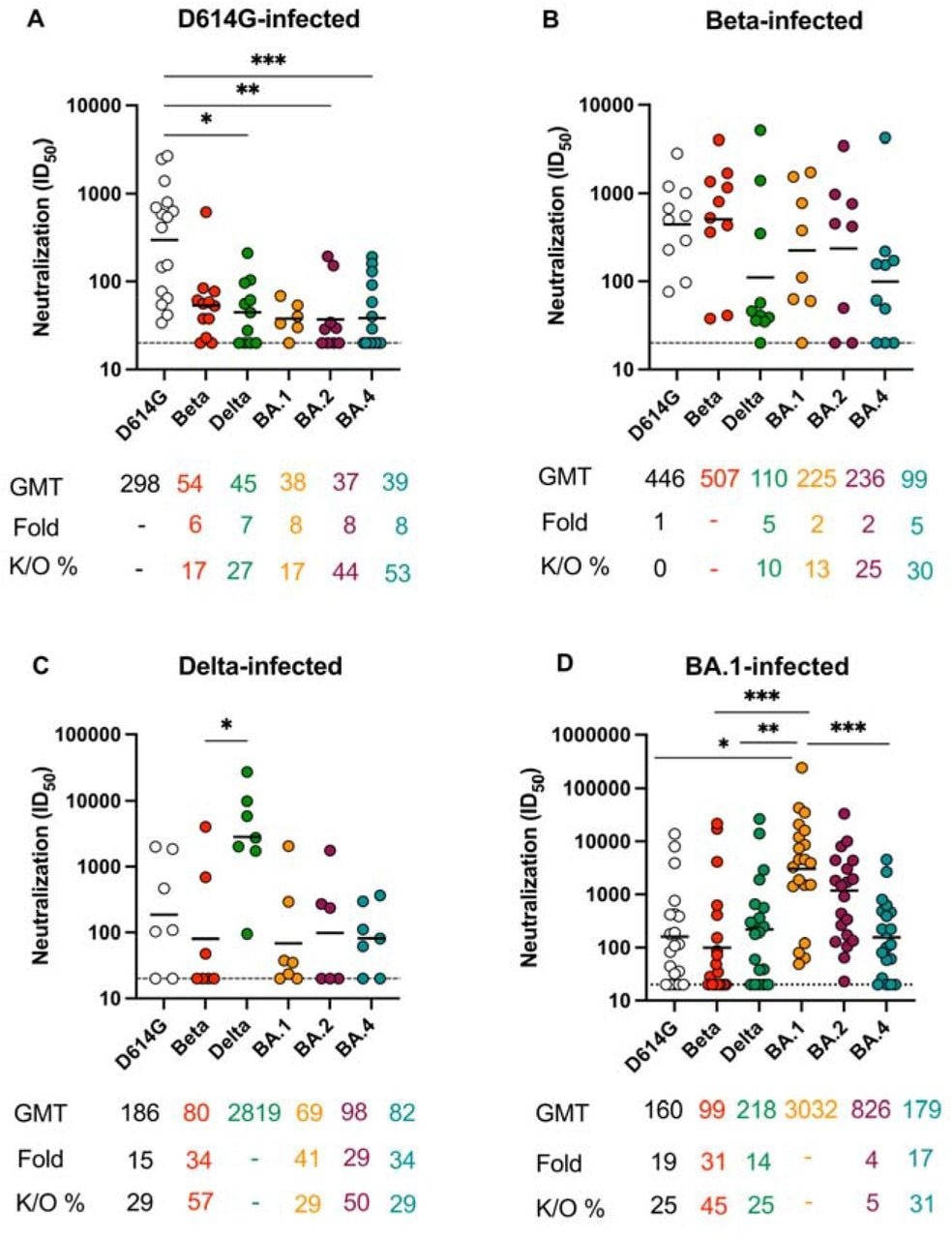 BA.4 neutralization escape varies by the infecting variant in unvaccinated convalescent individuals. Neutralization titer (ID50) in convalescent plasma from unvaccinated donors infected with (A) D614G, (B) Beta, (C) Delta and (D) Omicron BA.1. Plasma was tested against D614G, Beta, Delta, Omicron BA.1, BA.2 and BA.4. Lines indicate geometric mean titer (GMT) also represented below the plot with fold decrease and knock-out (K/O) of activity for other variants as a percentage relative to the infecting strain. Dotted lines indicate the limit of detection of the assay. Statistical significance across variants is shown by Friedman test with Dunn’s correction. *p<0.05; **p<0.01; ***p<0.001; ****p<0.0001 and ns = non-significant. All data are representative of two independent experiments.

Regardless of the infecting variant, BA.4 was found to be highly resistant to neutralization. In particular, antibodies elicited by Delta and BA.1 showed reduced efficacy as compared to those produced following D614G and Beta infection.

The Fc effector function has previously been reported to be preserved against other SARS-CoV-2 VOCs. In this context, researchers utilized FcγRIIIa activation as a proxy for ADCC and reported that BA.4 can escape ADCC with higher efficiency than other variants.

A greater reduction in neutralization against BA.4 occurred in unvaccinated individuals who recovered from COVID-19 caused by Delta or BA.1. To this end, autologous titers to the Delta spike protein were much higher as compared to those against D614G and Beta. Individuals who recovered from BA.1 infection showed reduced neutralization efficiency against BA.2 and BA.4. 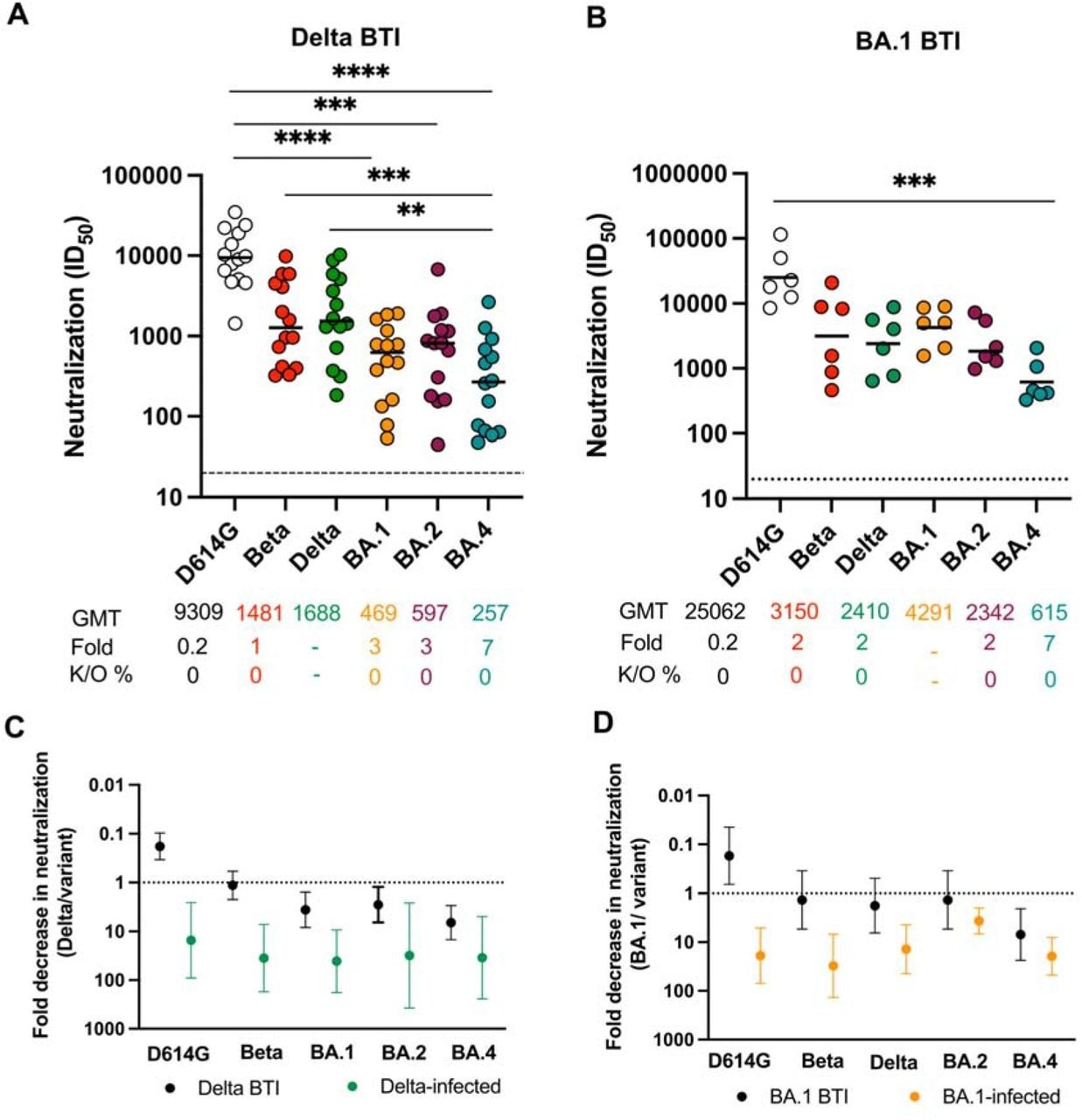 Breakthrough infections show reduced neutralization activity against BA.4, despite high titers against other VOCs. Neutralization titer (ID50) in convalescent plasma from vaccinated donors subsequently infected with (A) Delta and (B) Omicron BA.1. Plasma were tested against D614G, Beta, Delta, Omicron BA.1, BA.2 and BA.4. Lines indicate geometric mean titer (GMT) also represented below the plot with fold decrease and knock-out (K/O) of activity for other variants as a percentage relative to the infecting variant. Dotted lines indicate the limit of detection of the assay. Fold decrease in neutralization for each VOC represented as a ratio of the titer to the infecting variant Delta (C) or BA.1 (D), for infections in unvaccinated individuals (green for Delta and orange for BA.1) and BTIs (black). Statistical significance across variants is shown by Friedman test with Dunn’s correction. *p<0.05; **p<0.01; ***p<0.001; ****p<0.0001 and ns = non-significant. All data are representative of two independent experiments.

Although a high percentage of seropositive individuals are present in South Africa, the fifth COVID-19 wave occurred as a result of reduced sensitivity of BA.4 against nAbs as compared to other VOCs. Thus, BA.4 appears to possess a greater ability to evade ADCC than other VOCs.

The authors highlighted some of the limitations of the study including a small-sized study cohort. Another limitation is that all samples were not subjected to both ADCC and neutralization assays.

Furthermore, the researchers failed to include T-cell responses to BA.4, which is a key contributing factor that protects an individual from severe infection.

The authors confirmed that BA.4 exhibited high-level resistance to nAbs, regardless of the infecting variants. However, the current study reported that high neutralizing titers that arise due to breakthrough infection with either BA.2 or Delta variants after vaccination promotes neutralization against BA.4.

Additionally, a greater reduction in ADCC activity was observed against BA.4 as compared to other VOCs. Enhanced neutralization resistance of BA.4 is considered to be responsible for the increased transmission of this strain in South Africa, despite high seroprevalence rates.

bioRxiv publishes preliminary scientific reports that are not peer-reviewed and, therefore, should not be regarded as conclusive, guide clinical practice/health-related behavior, or treated as established information.

Getting the healthcare first impression right through smart pre-care engagement

Caring Does Not Pay – The Health Care Blog

Serena Williams to Retire So She Can Try for Baby No. 2

Getting the healthcare first impression right through…

Caring Does Not Pay – The Health Care…