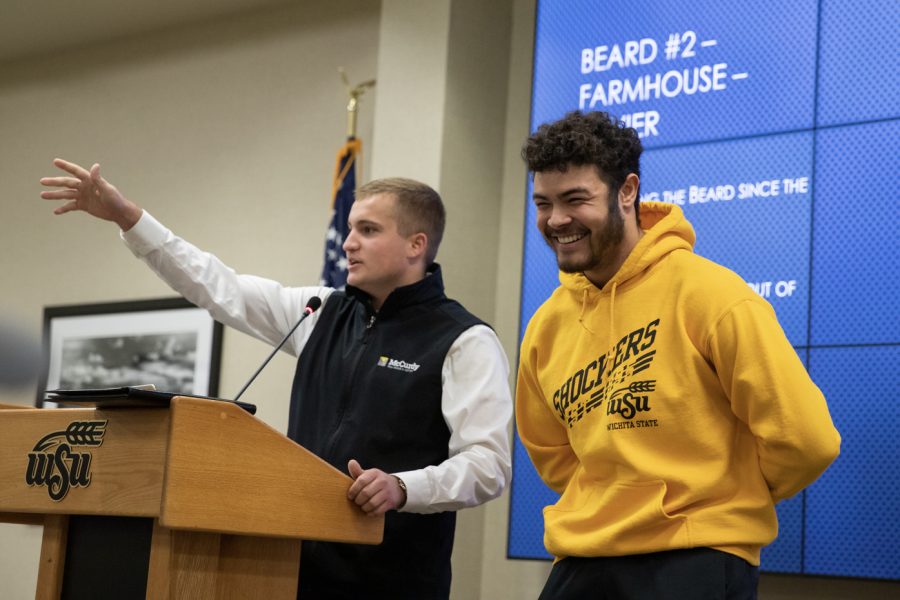 The Interfraternity Council brought together multiple WSU fraternities to contribute to the Movember week cause on Monday. The annual event encourages spreading awareness on the topics of men’s mental health, prostate cancer and suicide.

“Men in general just don’t open up as much as possible because it is not normalized enough, and that’s what we are trying to work on,” junior Brett Eilts, Interfraternity Council (IFC) president, said.

The IFC held a beard auction with a professional auctioneer where participants could bid on shaving their fraternity brother’s beards into the design of their choice. But walking around with an unusually shaped beard serves a greater purpose than providing some laughs.

“The whole idea is that when people who don’t normally have a beard suddenly have a patchy one, people ask about it and you can segway into a conversation about men’s mental health,” sophomore Will Dirnbeck, IFC scholarships and retention coordinator, said.

Fraternity members did not hold back in giving the participants eye-catching facial hair. A notable design of the night was a tic-tac-toe board shaved into junior Carlos Martinez’s beard.

“I think it’s worth it,” Martinez said. “I thought they would make it look a lot worse.”

Promoting men’s mental and physical health through a fraternity event gives the IFC an opportunity to encourage awareness in an environment where students already look to their fraternity brothers for support.

“I feel like having an organization back the movement is really helpful,” Martinez said. “I think it’s really important for fraternities to promote this because that’s the best way to reach obviously the guys that are in it.“

Fraternities are known to provide friendship and social activity to their members. Another benefit is the support that comes with creating connections to fellow fraternity brothers.

“A lot of us are continuing with fraternities because of the support we get in terms of mental health. It’s a great support system,” senior David Fitzhugh said.

This support becomes crucial when the responsibilities and challenges of adult life can take a toll on the mental health of students. Participating in a frat can also provide escape from the pressure of academic life.

“College can be stressful and it’s easy for things to get to you. That’s why it’s important to take care of yourselves and seek help,” sophomore Drake Mann said.

3D Printing Is More Accurate Than Milling For Dental Crowns: A Study

What Are Lemons? Health Benefits, Side Effects, and Nutrition Info

Bianca Andreescu opens up on how she improved her mental health

10 Movies and TV Shows That Portray Mental Health With Accuracy

The Best Stocking Stuffers for Babies and Toddlers

Ukraine looks to future as a hub for medical tourism

Alzheimer’s breakthrough as Britain on cusp of revolution…

How flipMD is Helping Physicians Create…