Sex and Your Gut: Libido

Recent research links the gut microbiome to sex drive and satisfaction. How did our bugs get into our sexual health in the first place?

In the early nineteenth century, human sexual behavior was defined by moralists and legal authorities, with the majority of theory and research emphasizing sexual disease and deviancy.1 It was not until Dr. Alfred C. Kinsey, trained as an entomologist and zoologist, applied the scientific method to the study of human sexuality in the mid twentieth century that a more robust scientific foundation was attempted

By the second half of that century, physicians, psychiatrists, and other clinicians were building a literature that became the springboard for one of the dominant theories about how and why humans and microbes have much to do with each other sexually: the Red Queen hypothesis.2

The Red Queen hypothesis takes its name from Lewis Carroll’s book Alice Through the Looking Glass, in which the Red Queen explains how her country differs from Alice’s: “Now, here, you see, it takes all the running you can do, to keep in the same place. If you want to get somewhere else, you must run at least twice as fast as that!” It’s an evolutionary theory that explains that human beings and their resident microbes, in their competition for resources, drive the evolution of each other. The theory asserts that in the co-evolution between us and our bugs, our bugs support successful sexual relations leading to mutually beneficial reproduction. 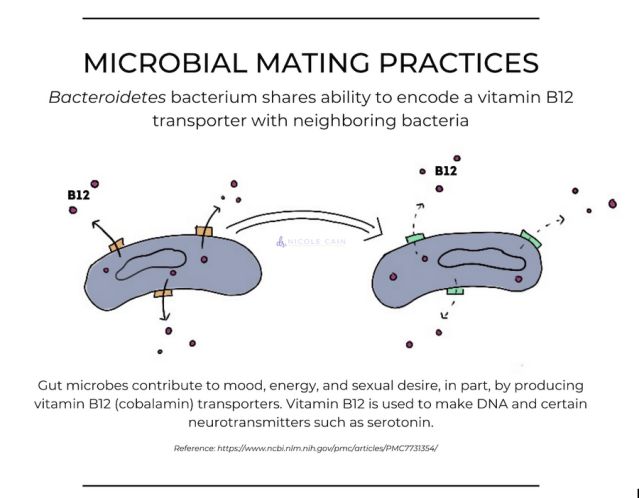 How does this work in practice? Findings from a groundbreaking 2021 study in the journal Cell Reports3provide a suggestion. Researchers report that “the functional and genomic diversity of the human gut microbiome is shaped by horizontal transfer of mobile genetic elements (MGEs).” In essence, microbes have sex in order to swap genetic material, an essential act for both bacterial and host survival and evolution.

An example of bacterial sex can be found in the human gut microbe Bacteroidetes sharing its ability to encode an essential vitamin B12 transporter with another microbe via horizontal gene transfer. In a 2022 article published in Science Alert4, authors describe one example by which a bacteria equipped with B12-transporting genetic material is able to transfer its genetic material to a neighboring bacteria. B12 nourishes the brain and nervous system, supports endothelial health of sex organs—including those necessary for a healthy erection5—and enhances sensitivity and pleasure sensations of genital nerves5, all of which are important players in a healthy sex life.

Although the relationship between sexual desire/function and the human microbiome is complex and multifactorial, there are a number of mechanisms by which it may regulate sexual health.6 And these sex-drive-boosting hacks can help keep the system running smoothly:

Research suggests6 that one of the most important steps you can take in getting your sex life on track is to increase your gut microbial diversity toward a balanced microbiome.

A probiotic formulation should undergo rigorous analyses including human trials to establish clinical efficacy. Consider an evidence-based probiotic that is formulated with microbial diversity in mind.

An example of such evidence can be found in a recent study8 where investigators conducted a systematic investigation of the GI tract before and after a four-week treatment with a probiotic formulation. They assessed the mucosal immune system, microbiome diversity, short chain fatty acid production, and mucosal permeability.

Lastly, ensure that there is plenty of fiber in your diet10, because it supports the good gut bacteria allowing for beneficial species to thrive. Dietary fiber also maintains bowel health, aids in hormone balancing, and supports detoxification. Think broccoli, lentils, whole grains, and apples. Prebiotic supplements including inulin, chicory, and oligosaccharides (GOS, FOS) can also play a role.

Your mood, emotional well-being, and feelings of connectivity are important aspects of a healthy sex drive. And don’t forget: mood is significantly influenced by the microbiome and gut-brain-targeted probiotics (psychobiotics).14

“People with depression … feel badly about themselves and might view their partners through a negative filter, all of which impacts sex drive.”15

Nirvasa Healthcare Advancing The Cause Of Right To Health…

Tips and Tricks for New Parents