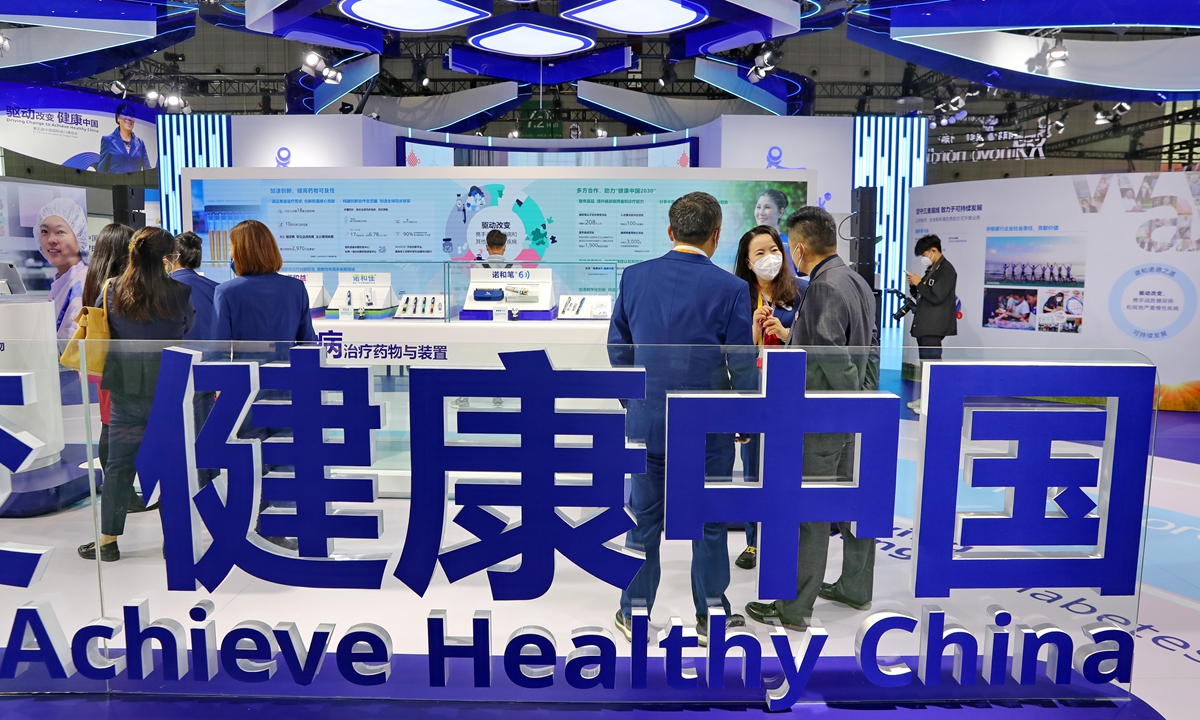 Exhibition area of medical devices and healthcare at the 5th CIIE on November 6, 2022 Photo: VCG

Banking on China’s large population, swelling middle class and ageing society, the attention given to the Chinese market by global pharmaceutical companies reached a new height at the 5th China International Import Expo (CIIE) in Shanghai, with company executives telling the Global Times that they intend to grow together with the Chinese market.

For the first time, the world’s top 15 drug makers gathered under the grand roof of the clover-shaped National Exhibition and Convention Center (Shanghai), as did the world’s top 10 medical equipment manufacturing companies, according to domestic broadcaster CGTN.

As COVID-19 lingers, related vaccines and drugs commanded attention at the 5th CIIE.

US-based global pharmaceutical firm Pfizer showcased its oral antiviral Paxlovid drug, while UK-based biopharmaceutical AstraZeneca brought Evusheld, a COVID-19 neutralizing antibody combination. Both drugs made their debuts at the CIIE. Paxlovid was approved for use in the Chinese mainland in February.

AstraZeneca also announced at the major import trade show its collaboration with WuXi Biologics to advance the export of Evusheld stock solutions. Its partner will manufacture and supply the drug for overseas markets, contributing to the “global fight against the pandemic,” AstraZeneca said in a press release.

Besides the solutions offered by Pfizer and AstraZeneca, BioNTech and Fosun Pharma introduced an mRNA COVID-19 vaccine at the show for a third year. US pharmaceutical giant Merck Sharp & Dohme (MSD) showcased information on its Molnupiravir COVID-19 drug.

Leon Wang, executive vice president at AstraZeneca, told the Global Times on Monday that China’s vast market, supply chain resilience and innovation capacity have led the company to continue to invest in China and make the country a global production center for its drugs.

AstraZeneca announced a decision to increase its investment at a supply site in Taizhou, East China’s Jiangsu Province by 180 million yuan ($24.84 million) and another one in Wuxi by 100 million yuan.

Wang said the drugs innovated in China could also benefit global patients, and this would be an obvious trend in the next three to five years.

The pandemic has resulted in a rising awareness among Chinese people as to health, and many drugmakers are increasing research and development in China to tap into innovation and be close to consumers’ needs.

Gijs Sanders, head of strategy and planning at UK-based consumer healthcare business Haleon, a spin-off of UK pharmaceutical giant GSK, told the Global Times on Monday that the company has developed milk-flavored Caltrate tablets uniquely for young Chinese consumers, thanks to findings by its local research and development center in Suzhou, East China’s Jiangsu Province.

“The Chinese market is big enough for us to develop this new product, but we believe this could also be exported to other countries in Asia,” Sanders said.

Sanders said that the Chinese market is one of the company’s fastest-growing markets, and the digital commerce sector is growing at a staggering 40 percent a year.

MSD signed a cooperation distribution deal with Sinopharm’s sales arm at the 5th CIIE, further detailing a September framework agreement for MSD’s antiviral COVID-19 medicine in China, the company said in a press release sent to the Global Times on Monday.

People of color underrepresented in mental health fields as…

The Healthcare Freedom Act is a vital…