What are footballers eating in Qatar?

They are on the move constantly for 90-plus minutes, tackling the opponent, dribbling the ball, burning calories and expending energy. Football played at the highest levels can be hellishly excruciating with some footballers reportedly burning up to 1,050 calories and losing a couple of kilograms of body fluid weight during matches.

The sport is highly physical and this was reiterated by 1998 World Cup winner Jurgen Klinsmann, who was quoted as saying, “The World Cup in Qatar will push players to their physical limit. The tournament will be tough. It will be demanding. Group stage games every three days. So physically, they’ll have to go to their limits. There is no doubt about it.”

The physicality of the World Cup being played in Qatar clearly puts the spotlight on the importance of footballers’ diets as much as on their training. It’s crucial that footballers get the right nutrients in the right quantities at the right times to ensure they perform their best on the pitch.

As these athletes slog it out on the pitch, we take a closer look at what they are eating and how it can affect their performance.

What’s on their plate

As the first week of the World Cup in Qatar comes to a draw, most of the famous players have taken to the pitch and shown off their football skills.

Off the field, they have been practising and training to keep their performance at the highest of levels. They have also been eating healthy to keep fit for the upcoming matches.

For instance, Portugal’s Ronaldo, who was stellar in his performance against Ghana, follows a very strict diet that he hardly ever skips. The five-time Ballon d’Or winner’s personal chef has revealed that the forward’s diet is based on natural foods such as fish, chicken, some vegetables, seafood, eggs, vegetable oils, oils and seeds.

He also sticks to eating six small meals a day – or one every three to four hours, interspersed with a lot of water. He also wolfs down on avocado toast for snacks during the day.

When it comes Argentina’s captain, Lionel Messi, who is now 35, he realises the importance of food in his career. Since 2014, he has been under Italian nutritionist Giuliano Poser’s watch, who keeps him away from fizzy drinks and pizza.

Poser has identified five key foods – water, olive oil, whole grains, fresh fruit and fresh vegetables – as the foundation for Messi’s dietary regime. He has also cut down Messi’s excessive meat consumption – something all too common in South America and Spain. “The amount of meat normally eaten by Argentinians and Uruguayans is too much, as it is difficult to digest,” he was quoted as telling Goal.com.”

It is reported that Messi eats only whole grains with some fresh fruits and vegetables for breakfast and for dinner he eats only brown rice and tuna, keeping it simple at night.

Brazil’s Neymar follows a very high-calorie diet; 60 per cent of his calories come from carbohydrates, 30 per cent from protein and the remaining 10 comes from fats, vitamins and other nutrients.

According to his food team, he eats three fried eggs and spinach with lean turkey for breakfast. Next comes a glass of a protein shake with a handful of sunflower seeds and almonds. For lunch, the Brazil forward is treated with turkey meatballs and a sweet potato. His evening snack is a turkey with peanut butter and some sunflower seeds. Neymar ends his day with white fish and chopped boiled cabbage.

His nutritional team has revealed that he has a ‘cheat day’ from time to time where he indulges in his favourites of fries and pizza.

Other players too have their own dietary plans and rules that they are following during the World Cup. It has been reported that the Argentinian and Uruguay squads have shipped almost 2,000 kg of meat from their homeland to Qatar.

Uruguayan FA president Ignacio Alonso said: “The national team is being accompanied by the best nourishment. The AUF is a historic ambassador of our country and will take with it another ambassador, which is Uruguayan meat, the best meat in the world.”

Meanwhile, the chefs preparing food for the South Korean team have sought creative ways to prepare nutritious and delicious meals for the players in the Muslim nation where pork is banned. In the absence of pork, the players have been getting their meat fix from chicken, beef and duck.

Chef Kim Hyung-chae, a veteran of four straight World Cups, said the key is to strike a balance between nutrition and taste.

Dietary plans for footballers has changed as the game has also become faster and more demanding in recent times. Gone are the days when footballers would step off the field and scoff down a meal of steak and chips. Remember when England’s Wayne Rooney said before the 2010 World Cup that he ate a bowl full of Coco Pops before each match.

Today, the diet for each player is carefully tailored to the needs and high intensity of the beautiful game. Each country participating has its own nutritionist and chef, ensuring that the squad only eats the best and food meant to fuel the body.

Interestingly, there’s no “one-size-fits-all” when it comes to footballer nutrition. Every player needs to base their nutrition on their body weight, height, body fat percentage, and position on the field.

The position a player is in on pitch is an important factor in the food they eat. For instance, a midfielder runs for an average of 11.27 km per game whereas a striker will run for 9.64 km, so the necessary nutritional intake for these players would change. This means Croatia’s Luka Modric, who their midfielder, would be having a very different diet from Portugal striker and ace footballer, Cristiano Ronaldo. 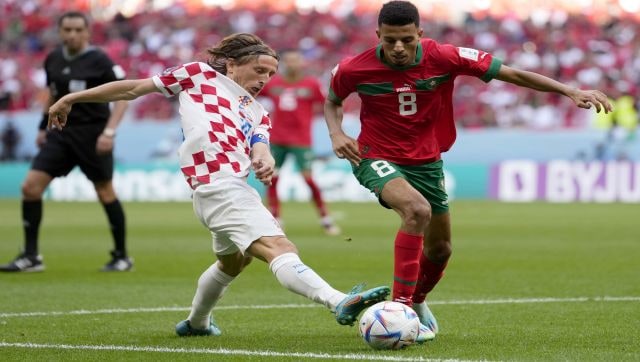 The diet plan for footballers vary according to their body as well as the position they play. For a midfielder like Croatia’s Luka Modric, his carbohydrate intake would be different than that of a striker. AP

Several nutritionists have stated that most footballers in order to prepare their body for 90 minutes of intense exercise, will start with a sports drink.

They have also said that most footballers will stock up on carbohydrates such as whole grain breads, pasta, rice, potatoes, fruits, and vegetables days before their match.

Hours before their match too, players consume cereal, pancakes, baked beans and toast or yogurt to up their energy. After their match, players often snack on carbs and proteins as a way to restore energy and revitalise their muscles.

Players refrain from eating dairy products on the day of the match as it could produce discomfort. They are also recommended to avoid hot spices, and acidic or irritating ingredients such as pepper or citrus, which may cause reflux or acidity. Footballers are told to refrain from dairy and spicy foods on the day of matches so as to avoid irritation or indigestion. File image/AFP

Fuel for the body

Dieticians and sports specialists have espoused the difference a good diet can make to a footballer’s game.

“Nutrition can make at least a 10 per cent difference between when you get it wrong and you get it right,’ Don Maclaren, the UK’s first ever professor of sports nutrition, was quoted as telling Daily Mail. “It has become much more important.”

All in all, food isn’t just sustenance for footballers, but it’s the fuel for them to play better and hopefully, get the trophy home!

With inputs from agencies

Dealing With Depression After Breakup

Study reveals the widespread impact of…

Why UNC Chose AWS as Its Cloud Partner…