“Yathu Yathu”(For us, By us!): an innovative and co-designed intervention to deliver peer-led community-based sexual and reproductive health service to adolescents and young people in Lusaka, Zambia 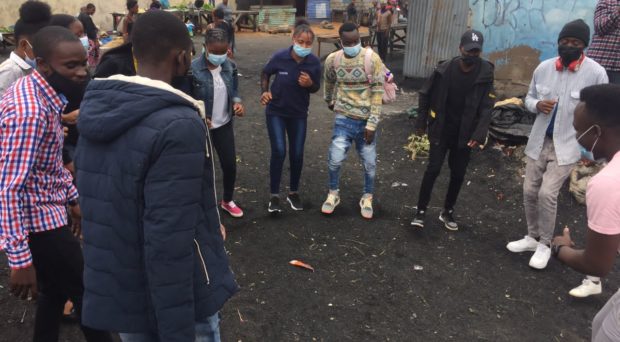 Young people in a study community

In Eastern and Southern Africa, adolescents and young people (AYP) aged 15-24 years face a high burden of HIV, especially adolescent girls and young women (AGYW) who are disproportionally affected. In recent years, AIDS has become the leading cause of death among adolescents in Africa. Anti-retroviral therapy (ART) has dramatically improved survival and can significantly reduce the risk of onward transmission of HIV, but reducing new infections requires increased access to and use of all aspects of the HIV prevention and care continuum among AYP. Unfortunately, AYP have limited access to available HIV-related services and poorer outcomes across the HIV prevention and care continuum.

How we conducted our research

To improve outcomes for AYP, the Yathu Yathu (YY) study in Lusaka, Zambia, aimed to provide sexual and reproductive health (SRH) services for AYP designed and led by AYP. Designing YY began with a consultation with young people themselves, they spoke, and we listened. During formative work with AYP, they expressed that their limited access to sexual and reproductive health (SRH) services was driven, in part, by a reluctance to access services from health facilities due to fear of being reprimanded by health care workers (HCWs) and being seen accessing services often considered inappropriate for AYP by their parents and their communities.

We learnt that AYP know their needs and wants with regards to SRH services, all the way from the type of services they would like, where they would like the services to be located and who they wanted to provide these services.

“… sometimes you need fellow youths [peers] because we know that although they are testing people [offering HIV testing], they also experience what we experience … they know what they are talking about because they also go through the same things we experience” (young man, 15–17 years)

After co-developing the YY intervention, we implemented it as per the AYP’s feedback to us, right down to the design of the logo and the colors used at the community-based spaces called YY hubs. We provided HIV testing, sexually transmitted infection (STI) screening, contraceptives, and a brief risky alcohol use intervention. We also introduced an innovative incentivized system called the “prevention points system”, which included the use of a prevention points card (PPC) allowing AYP to ‘gain’ points for each service used and redeem these points for “rewards”. Rewards were low-cost items such as soap, toothbrushes, toothpaste, exercise books and YY-branded T-shirts. This was to encourage AYP to use the services as well as allowing us to track service use at the hubs.

We tested whether the intervention increased access to SRH services. To do this, we did a cluster-randomized trial (CRT) comparing the number of young people who knew their HIV status (i.e., self-reporting living with HIV or HIV testing in the last 12 months) after 2 years of YY service delivery in 10 randomly allocated geographical areas (intervention zones, so those who had access to YY) to those who had access to standard of care (youth-friendly services at local health facility) in 10 randomly allocated geographical areas (control zones). In addition, we used the PPC data to estimate the impact of the intervention on the coverage of SRH services to AYP.

Of course, as with the world over, COVID-19 hit Zambia and resulted in service delivery interruptions and changes to the intervention to ensure services continued to be provided safely. Despite this,

“… the environment here is very conducive, people are friendly, the counselors are qualified and when you come, the first thing they will speak of is confidentiality … so I know that everything that I will say will remain here and no one will know about it” (20 – 24-year-old young woman)

Yathu Yathu showed that taking SRH services to the community has the potential to reach more young people with SRH services, particularly HIV testing services. As we approach World AIDS Day and need to ‘close the tap’ on new HIV infections, it is crucial to meaningfully engage AYP in addressing their own SRH needs and to provide services that meet their own unique needs.

Dance along! See all the videos including a tour of the hubs on our YouTube channel!

How to Talk to Your Doctor About Drug Costs

Clitoris has 10,000 nerve endings, study finds. What it means.

Will sextech survive a tech crackdown and cost of living crisis?

The Healthcare Freedom Act is a vital…